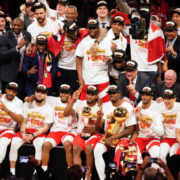 On Thursday, June 13, 2019, millions of Canadians watched as the Toronto Raptors brought the NBA Finals to a close with the strength of a nation behind them. The Raptors are a one-of-a-kind team. Unlike the rest of the NBA, there is only one team north of the border, supported not only by the city they represent but an entire country whose colours they sport with pride and joy.

The post season always brings a special kind of energy to Toronto, but this year was different. The fans seemed to cheer louder, line up longer, believe harder. There was definitely something in the air. Toronto was not on its own, as millions of Canadians across the globe could feel how close the Championship was. From the very start of the playoff season, Jurassic Park was filled during every game, home and away, rain or shine. Fans ensured the Raptors heard their support at every moment.

Then came the FINALS, and Toronto, the GTA and Canada literally became one!  Every single game played at that point was historical and not to be missed. There was not one empty seat in any bar in any part of Toronto, or possibly across the country during any of these games. You could find fans in local fast food restaurants watching the game, simply because they had one TV – which normally played the news throughout the day. That is how epic this moment was for Canada.  Jurassic Park Tailgate events were brought to various cities from Brampton, ON to Montreal, QC and Saskatoon, SK – our country made the NBA Finals accessible to everyone and literally became Jurassic World at that point.

The Toronto Raptors took the NBA Championship on Thursday, June 13, 2019 — a day that will most certainly be recalled as one of the greatest days in Canadian sport history. The city went absolutely insane! I don’t think anyone could have anticipated just how dedicated Torontonians were to celebrating this victory. The streets were flooded with fans for hours! Chanting, hugging, high fiving, honking, flags waving, fireworks, just pure joy on the face of every single fan! And that was just the beginning. On Monday, June 17, 2019, We The North Day could not have been predicted by anyone. Well over 2 million Canadians flooded the streets of Toronto to welcome our boys home with the Championship trophy during the victory parade. Businesses were encouraged by the mayor to give employees the day off to cheer our Raptors all the way to the end, and the Toronto Raptors parade is said to be the longest NBA Championship parade in history at 5 hours and 25 minutes.

But this post season was more than just basketball — it was about the integration of community, culture and the pride of a country who stand behind a team who has brought so many Canadians together. The NBA playoffs had Canadians on their feet in bars and homes across the country, sharing food, drinks, laughs and team-branded gear, ensuring everyone could support in the best way possible. We welcomed each other with open arms, no questions asked. We simply wanted to make sure this moment was experienced as a community.

Nav Bhatia, The Raptors beloved superfan reminded us how important the Toronto Raptors are beyond basketball. During the finals, Nav was featured in a Tim Hortons spot that tells his story of immigration to Canada. Nav has never missed a game from courtside seat A12; that’s approximately 960 season games and 50 playoff games. He is a pillar in his community and takes pride in his commitment to supporting the Toronto Raptors over the course of 24 years. Every year he gives away Raptors tickets to kids in the community, particularly immigrant children, allowing them to integrate and be immersed themselves into the culture that comes with being a Canadian – strong, diverse and embracing. He became the face of the diversity that our country has become known (and loved) for.

And every time the cameras panned the faces of fans in the arena, Jurassic Park, or any of the hundreds of pop up viewing parties across the country, we could see the diversity of our proud nation at its best. Even the Raptors themselves represent 6 different nations and many different cultures and backgrounds.

This past month has been a dream for the Toronto Raptors and Canada, but beyond that it was a great example of what true “integrated” marketing can look like, and how to accurately showcase representation and diversity. This might very well be the best example of how accurate representation advances a brand – in this case Canada’s image and brand, in the right direction and supports the narrative shared across the world.

It is time marketing focuses beyond the tactical elements of medium use, and ensure there is an accurate integration of diversity. The spotlight placed on Nav Bhatia during this time was a pivotal step and example of integrating diversity and accurate representation in integrated marketing. Canada is a melting pot of individuals from across the world,  and as an Integrated Marketing Agency ourselves, The Neighbourhood Agency  is proud to be a part of what’s happening in The North.